6/4 Time to get back to work on the scope. I had hoped to take it out for it's first "under the stars" test Friday night, but too many other things got in the way and it will have to wait. My two big projects have been mounting the altitude drive motor and trying to get the scope to quiet down. As I said, an LX200 moving flat out is dead quiet compared to how these steppers sound! Here's a picture of the alt motor mounted on the rocker box. All the gray-black stuff around it and the screws is foam rubber that I'm using for sound dampening.

I don't yet have the nylon rod attached to the motor. The foam, while as ugly as sin, has provided very effective sound deadening. When micro stepping, the motor is much quieter than it was before. Not exactly silent, but very tolerable from the eyepiece position.

The next problem had to do with the balance of the telescope. The scope is perfectly balanced with a Paracorr and 35mm Panoptic when pointing at 45 degrees altitude. Push it up or down and it wants to return to this home position. The nylon rod pushed into the gear is more than enough friction to hold the scope in any position. The problem that came up, however, is that the force of the telescope pushing down as the scope nears the vertical combined with the slippage of the rubber hose and clamp against the motor shaft would cause the rubber hose to slip off the shaft. Because the telescope wants to move downwards, this is acting as a strong force pulling the nylon rod and hose coupling off the motor shaft. The solution to this problem was an end plate pushing against the end of the threaded rod. I also made a block of wood with a threaded insert that is screwed to the rocker box. There is a 1/4x20 bolt screwed into the threaded insert that presses against a thin piece of aluminum and this metal pushes against the altitude rod holding it in contact with the altitude gear. Here's a picture of the whole assembly.

The rod pressing against the aluminum plate provides enough force to keep the hose coupling from coming off the motor shaft. There is still a tendency for the hose to slip on the shaft as the scope nears the vertical. This was eliminated by configuring the software to not go above 85 degrees of altitude. This is not a major loss since it represents "Dobson's Hole" familiar to all Dobsonian users. If something is in the hole, wait 15 minutes and it will move far enough to be accessible while still close to the zenith.

The bolt putting pressure against the aluminum strip and then against the threaded rod has worked out very well to keep the rod from jumping out of the gear. Another similar rig will be built to serve the same purpose on the az rod.

7/9 Not much good news to report at this time. I finally got the scope out for its first test under the stars and the performance of the drive system was poor. Before we get into that, here's the latest additions to the scope. In an effort to keep the 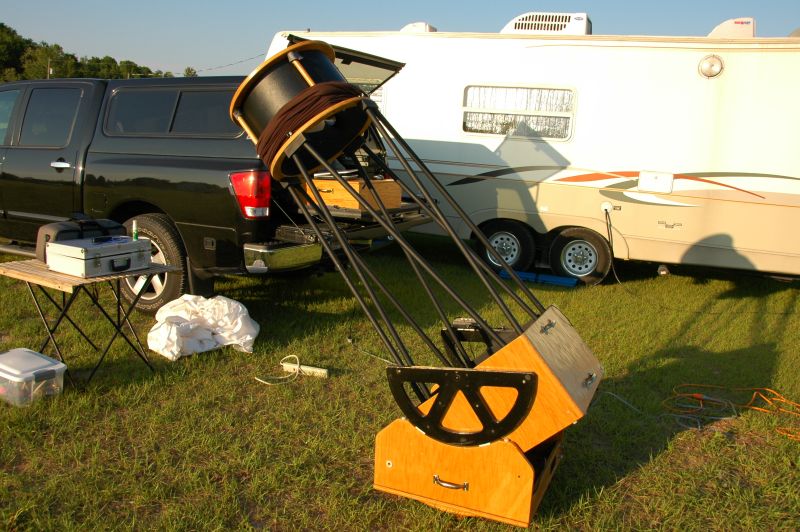 number of cable trailing off the scope and over the ground, I decided that mounting a table to the rocker box might be the way to go. Main design criterion was that the table not require any hardware to mount to the scope. Setting up the scope and drive system will take enough time - just wanted something that "snapped" together. Here is the result. As you can see, the table supports are just dropped into mounting brackets on the rocker box. They are supported by a lip about 1/4" wide where the side boards mount on the bottom board (thanks Rick!) Two supports are screwed and glued to these uprights. The table top has two holes cut into it to allow it to drop down onto the support brackets.

Here are a couple images showing the mounting brackets on the rocker box and the top of the table with the upright showing through the hole.

The Atlanta weather has been abominable lately. Almost no rain, temperatures in the mid 90's, lots of humidity and mosquitoes by the billions. In other words, the worst imaginable weather for schlepping out almost 200 pounds of telescope, drive system, 95 amp deep cycle battery and all the parts and pieces needed for testing. My observing season usually ends in June and starts up again in September when the weather has become a bit more civilized, but it was time to face the hot July night and see if any of this stuff actually worked.

Quick answer - not very well. Testing indoors is a lot different than trying to put the system through its paces outside. Even indoors the azimuth drive has been a bit flaky with the motor stalling out. It is very sensitive in regards to angle the threaded rod approaches the worm wheel and the amount of pressure applied on the worm to the wheel. Get it just right and it slews beautifully. Get either or both off just a bit and the motor stalls or the rod jumps out of the JB Weld gear.

Setting the scope up on uneven ground with grass turned into a disaster! Even with tweaking, it became impossible to slew more than 45 degrees or so before the motor stalled. The biggest problem was ground clearance. There is only 1 inch between the bottom of the motor mount and the ground (image). The mounting plate was trying to push itself through the grass as well as move the scope and it proved just too much for the poor stepper. The backyard had been freshly mowed - nothing like some of the observing fields where we set scopes up! In some cases, the grass has been over 6 inches tall and would overwhelm the drive system completely. I see two possible solutions - either raise the base by increasing the height of the legs under the ground board or picking up one of those plastic mats office chairs roll on. Since it would be impossible to guess how deep grass might be at some unknown observing field in the future, the mat will probably be the easiest way to go. Drop the mat on the ground, walk around stomping everything flat and then set the scope up.

Second problem is friction. The Teflon on Formica feels very smooth in the shop, but once you get out on uneven ground, it becomes obvious that Mel and the listserv know best - ball bearings will be needed under the rocker box. Someone (I have forgotten the name) came up with the idea of using aluminum channel as a bearing support and that's the route I plan on following. More pictures and information after a trip to the hardware store.

Third problem is in altitude. The altitude drive works much better than the azimuth drive. What's missing is smoothness of motion during a slew. The scope sets up a rocking up and down motion while slewing that needs to be investigated and corrected. I suspect scope balance and flexing in the altitude drive system to be the root causes. Flexing is a problem because the motors are not mounted firmly, but are "floating" on a bed of foam rubber for noise reduction. This adds flexing to the system while making parts alignment difficult as well. Next trip will also include a stop at AutoZone for some cork gasket material to see if cork can provide noise reduction while keeping parts in alignment.

The final problem was with the motor's microstepping. No matter how I have set my PWM values, I seem to end up with a bunch of little steps and one big step during one complete microstepping cycle. This big jump was quite apparent and objectionable at the eyepiece. Mel's latest software version (7/7/2000) appears to offer a tuning solution where you can use the + and - keys to make single microsteps and the ability for the software to double the number of steps while making the PWM interpolation. I'll be giving this a try over the next few days to see if I can smooth out the motor motions. Mel's other suggestion was to try other steppers. He had run into motors that just didn't microstep smoothly and finally replaced them.

The scope is back in the work room and I'll keep everyone posted about progress towards version 2.